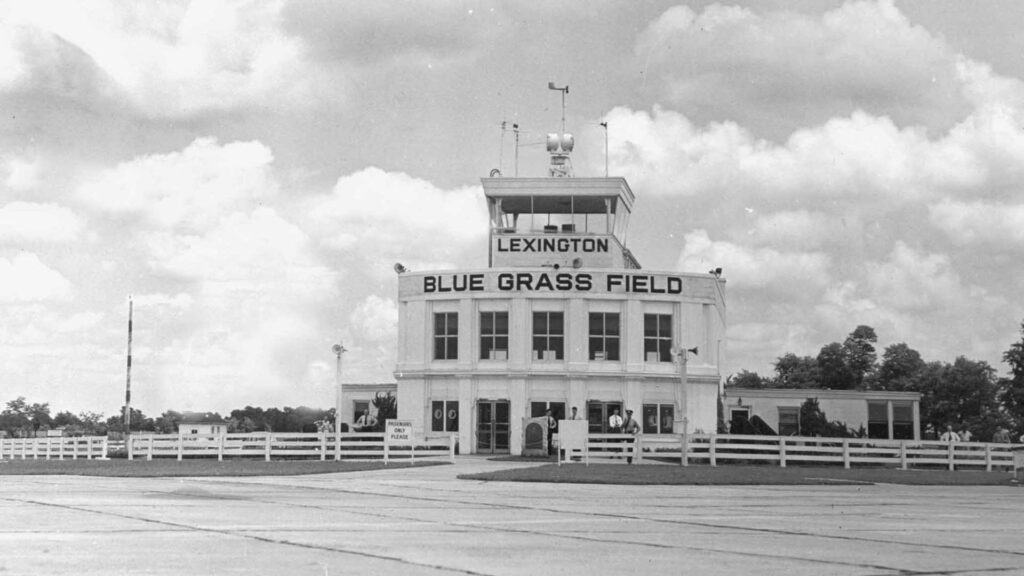 October 13, 2021 – Today, Blue Grass Airport celebrates 75 years of providing our community with commercial air service. On this date in 1946, Kentuckians saw the first commercial aircraft serve the region via a Delta Air Lines flight on a 21-passenger Douglas DC-3. Enroute to Cincinnati, this first flight was quickly followed by an Eastern Air Lines flight several hours later. Since that day, Blue Grass Airport has been offering service to and from Lexington, providing access to destinations worldwide.

Our story began with the 1941 construction of our airfield to support World War II efforts. Prior to Blue Grass Airport, or Blue Grass Field as it was known until 1984, the central Kentucky area was previously served by two smaller airports. The first airport was at Halley Field, located near Meadowthorpe subdivision in Lexington, and the second airfield, Glengarry/Cool Meadow, was located at North America’s oldest Thoroughbred auction company, Fasig-Tipton. No longer viable options to serve Kentucky’s growing population, land was acquired for the airport that you are familiar with today and commercial flights began in 1946.

Along the way, many things have changed. The airport has gone through expansions and renovations. In 1976, the airport opened a new terminal, which remains the primary passenger facility today although extensions have been added over time. The airfield continues to evolve as well. In the last decade alone, Blue Grass Airport has invested nearly $100 million in enhancements to its airfield and several airport support facilities.

“Blue Grass Airport’s remarkable aviation history is an accomplishment of hard work by so many members of this community,” said Eric Frankl, executive director of Blue Grass Airport. “Seventy-five years ago, Delta Air Lines took a chance and invested in our region. Later joined by Allegiant, American Airlines and United Airlines—and many other airlines that have come and gone over the years through mergers and acquisitions, Blue Grass Airport has served as many as 1.4 million passengers annually. We thank our community and those who work here for supporting this airport and helping us continue to soar.”

Throughout the years, Blue Grass Airport has welcomed many notable guests, from celebrities to political figures, each receiving a friendly welcome upon arrival. Presidents such as Eisenhower, Kennedy, Nixon, Bush (both father and son), Clinton, Trump and Biden have all traveled through Lexington at some point in their careers. Queen Elizabeth II flew into Blue Grass Airport on four separate occasions. Many famous horses, including Kentucky Derby and Breeders’ Cup winners, have also flown into the horse capital of the world for racing and other equestrian events. Affirmed, American Pharoah, John Henry, Seattle Slew, Secretariat and Zenyatta are just to name a few.

Stepping into the upcoming years, the airport looks forward to continuing to serve the region and to adapt and grow with the ever-changing needs of the community. Blue Grass Airport is preparing to begin a 20-year master plan that will guide the airport through a thoughtful forecasting of future activity and plans for continued development.

“A master plan is often one of the most important processes that an airport undergoes to ensure it is meeting the needs of the region,” said Frankl. “The Airport Board and its staff is focused on creating this blueprint via a collective effort that involves its stakeholders and the general public, all of which play a vital role in the development of the airport’s success.”

Blue Grass Airport chronicled its history in 2015 with the publishing of Blue Grass Airport: An American Aviation Story, produced by Blue Grass Airport and West High Publishing. This book tells the history of central Kentucky through a national lens. As part of this project, the airport also published a series of 16 oral history videos to document the airport’s rich history. Those videos are available for viewing at https://bluegrassairport.com/pubsvideos.html.

Located in Lexington, Kentucky, Blue Grass Airport celebrates 75 years of commercial air service as Kentuckians “Get Going” with non-stop and connecting flights to hundreds of destinations worldwide. Serving as many as 1.4 million passengers annually, the airport focuses daily on fulfilling its vision of providing a welcoming approach connecting Kentucky and the world. The airport supports the region with approximately 3,475 jobs and a total economic output exceeding $370 million. Receive the latest airport news by liking us on Facebook at www.facebook.com/bluegrassairport, or following us on Twitter at www.twitter.com/bgairport.

Avelo Airlines Takes Off in Lexington with Nonstop Service to Orlando